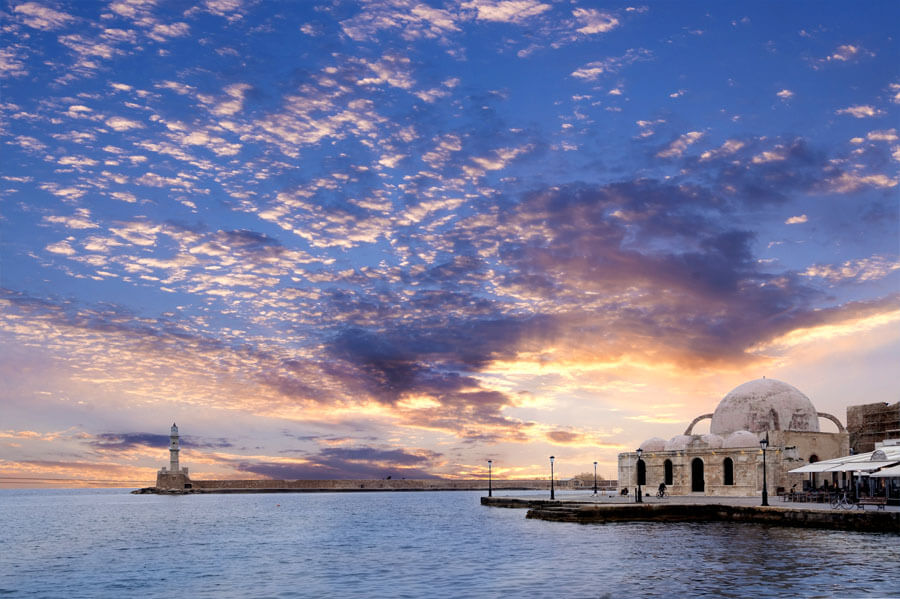 Chania’s Venetian Harbour was carefully built in the 14th century for commercial purposes and for protection against pirate raids. Today it is a point of reference for the city of Chania, and a much-photographed place with a touch of magic! This city hub is filled with cafes, restaurants, tavernas serving local delicacies, bars, pastry stores and art shops as well as monuments referring to various historical periods. You will find there is a balanced mixing of Cretan, Ottoman and Venetian elements, beautiful narrow alleys across the old town and amazing architecture.

The old port is a fascinating place any time of the day or year, as the sun creates a variety of visual effects and gives the impression you see a different place each time you visit it! Start your walk at the NW part of it where you will see the imposing Lighthouse, the ‘jewel’ of the harbour. To your right lie the Firkas Fort built by the Venetians in order to protect the port entrance. There is a captivating brick-coloured building at the Fort entrance which once housed the Venetian naval guards.

Nowadays you will find the Maritime Museum of Crete with a valuable collection of naval objects providing insight into the rich history of Chania and W. Crete. Right after that, walk along Angelou St., an upward alley which is one of the loveliest backstreets of the Topanas quarter. Feast your eyes on the Venetian architecture typical of the 16th and 17th centuries. If you fancy some more strolling, walk along the streets that begin from the coast and lead to the most beautiful part of the old town of Chania, where most of these Venetian buildings, above restaurants and cafes, have been converted into hotels offering beautiful views to the old Venetian harbour of Chania.

Your ride on Kountourioti Coast ends at the intersection with the Sintrivani Square which used to be for many years the main square of the city of Chania, whilst today is still the central square of the old town of Chania. From there starts the Tombazi Coast and a bit further, the typical Turkish architecture building will surely grab your attention. The Giali Tzamissi which in Turkish means, "The Seaside Mosque", is the oldest Muslim building in Crete.

A part of its southern side destroyed by the fierce bombardment of the Nazis during the second world war. Today the small interior space of the building is primarily used as an exhibition hall. Continuing your walk along Tombazi Coast, behind the restaurants, cafes and bars, you will see the Byzantine walls towering the Kasteli hill, which is known as the place where the history of the city of Chania began. This is the location of Kydonia, a Minoan town, where the first human settlements appeared as early as the Neolithic age. Climb the steps uphill Afentoulief street, next to Megalo Arsenali, and once you are on top drink in the panoramic view of the harbour area.

Today’s Centre for Mediterranean Architecture, one of the city’s gems, is housed in the former Venetian Dockyards (Megalo Arsenali) to the west part of the harbour, while the seven neighbouring dockyards lying on the port’s east side give us a good picture of how the harbour looked like during the Venetian rule. The shipyards had an opening on the side of the sea where waters easily reached the land so as to facilitate pulling the vessels in and out. On the spot nowadays you will find a marina where small cruise and fishing boats dock.

As you pass by the last fish tavernas on Akti Enoseos on the eastern part of the harbour, you will see three dockyards, named Moro after the Venetian Governor who saw to their construction. The left one was the last to be built during the Venetian Rule and it remained unfinished until recently. Today it houses the Chania Sailing Club. Let’s pay a visit to the Greek Traditional Shipbuilding and Ancient Shipbuilding exhibitions, located on the dockyard to the right. You will get to see and learn interesting information about nautical knots, Greek lighthouses and observe up close a model 15th c. BC Minoan ship.

Beyond the shipyards and to the right you can visit the Koum Kapi seaside area (Sand Gate) as well as Sabbionara, the Venetian ramparts built entirely in the sea, which is the only remaining gate of the former Venetian city walls. There are many cafes, tavernas and bars facing the Cretan Sea. Let’s continue our stroll on the harbour’s breakwater, heading towards the fascinating Lighthouse where we end our walk. Originally built by the Venetians, it was reconstructed in the form of a minaret by the Egyptians in the early 19th c. and has remained unchanged ever since. The breakwater area all the way to the Lighthouse affords a panoramic view of the harbour, the old town of Chania against a backdrop of the White Mountains.

Chania’s Venetian Harbour area is like a wonderful maize that tempts you to explore every little part of it. You will find you can’t help falling in love with the town and sweet thoughts about your visit will give you memories to cherish long after you have left the island!