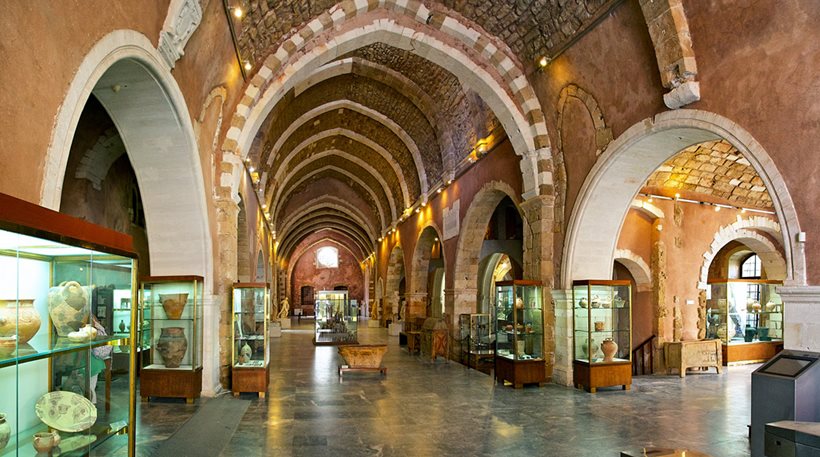 Chania, one of the most beautiful cities of Greece, managed to preserve its original colors and historical character, despite the fast-growing tourist industry. Old elements are harmoniously intertwined with modern ones: the legendary Minoan splendor with the Venetian sophistication, the Turkish simplicity with the medieval beauty, the plain architectural style with the intricate synthesis.

Archaeological Museum was founden in 1963 and is located at the place of the Venetian Monastery of Agios Fragiskos in Halidon Street in Chania. The collection of the museum includes findings from excavations in several areas of the city that have been performed during the last 50 years, and its exhibits cover the cultural history of Chania from the neolithic period till the Roman Empire.

Maritime Museum of Crete is located at the entrance of the historical fortress "Firka". It was founded in 1973 in order to promote the nautical traditions and history of the island. The Museum cooperates and interacts with other Nautical Museums in Greece and abroad.

Typography Museum was recently founded with the efforts of a local journalist. It is found in the Park of Local Industries in Souda and exhibits old seals, banknotes, pressing machines, rare books, and other items.

The fatherly house of Eleftherios Venizelos in Halepa of Chania, which constituted his house for more than thirty years, from 1880 to 1910 and later for short periods from 1927 to 1935, today constitutes a Museum under the responsibility of “National Institution of Researches and Studies El. Venizelos”, in which it has been granted by the Greek state.

Byzantine and Post-Byzantine Collection is housed in the church of San Salvatore. It hosts icons, frescoes, golden jewelry, Venetian coins, and many other exhibits.

Folklore Museum of Chania – Cretan House is located at the centre of the old city of Chania, in Halidon Street, next to the Catholic church. It includes folklore and traditional exhibits that allow the visitor to have a representative picture of the way of life of older residents of island during the 18th and 19th century.

The modern city of Chania is founded in the site of a significant ancient Minoan settlement, Kydonia or ku-do-ni-ja as it appears on Linear B script. According to the tradition, Kydonia was one of the three cities founded by King Minos in Crete.

Ancient Aptera is located about 15 km. away from the city of Chania and above Souda Bay, and during the Minoan period was one of the most important city-states of Crete. It is located on en extended plateau with altitude 200m and astonishing view of Souda Bay.

The Grand Arsenal is the last of the 17 Neoria to the west. Its construction started in 1585 by the Intendant Alvise Grimani. A new era began for the Grand Arsenal with the addition of the second flour in 1872 during the Turkish period. The building hosted several important public services and authorities.

The Egyptian Lighthouse, which is one of the oldest in the world, prevails in the old Port of Chania. The sea-tossed stone lighthouse that is located at the edge of the breakwater, is not only the “guard” of the old Venetian port, but also its most famous jewel.

Giali Tzamisi is the unique preserved Mosque of the city and was built during the second half of the 17th century. It is located at the Venetian Port of Chania. The Mosque Kioutsouk (meaning "little") Hassan or Giali Tzamisi (meaning, the Mosque of the Seaside), as it is commonly known, is a unique sample of islamic art of Renaissance.

During the Venetian occupation (1204 - 1669), the need for the closer presence of Venetians in Crete made them construct a large number of "Neoria" (arsenal) in Chania, where the ships would be repaired during the winter. The construction of the first two "Neoria" in Chania was completed in 1526. In 1593, sixteen "Neoria" had already been constructed.

The rampart Sabbionara still preserves its Turkish name "koum - kapi (Kum Kapisi = the Gate of the Sand), is located on the northeast corner of the Venetian walls and is completely constructed in the sea. On the front of the rampart, the circular Venetian emblem of the lion of Agios Marcos is still preserved. It is the only preserved gate today and its external side had been modified during the Turkish period.

The Minaret of Agios Nikolaos

The church of Agios Nikolaos, located in Splantzia Square, was built before 1320, during the Venetian period, as a monastery of Dominican Order. After the dominance of Turks in Chania in 1645, the church was transformed into a mosque and was given the name Hiougkar Tzamisi (the Emperor’s mosque), in honour of sultan of the Ottoman Empire, Imbraim.

The Municipal Market the large building of 4000 square meters in the centre of Chania is the "heart" of the city. Its foundation started on August 14, 1911, at the place that was the main rampart of the fortification during the Venetian period, and the construction of the building was completed during the second half of 1913.

The graves of Venizelos

The graves of Venizelos family is one of the most popular places that offer a panoramic view of Chania, only a few kilometres east of the city, on the road to Akrotiri and airport. Here are located the graves of the charismatic Greek politician, and seven times Prime Minister of Greece, Eleftherios Venizelos, and his son, Sofoklis Venizelos, who was also Prime Minister of Greece from 1943 to 1952.